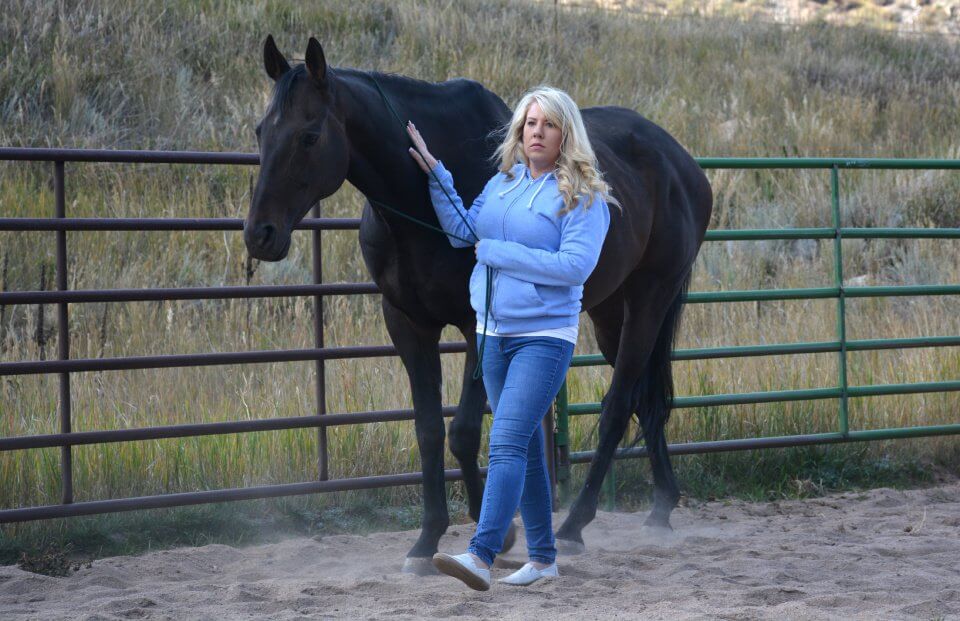 Sedalia – A team of healers occupies the stable at Begin Again Ranch.

Ki, a sleek, black Missouri fox trotter with a small splotch of white on his temple, is the sensitive one. Smarty and Bodhi are the quarter horses and Burrito is the mini burro with a fuzzy head who makes up for his lack of stature with a snuggly disposition.

The creatures patiently wait in their stalls, not to be saddled up for a trail ride, but to come to the aid of humans in crisis, transition and transformation. Their natural empathetic nature is believed to help people, couples and groups work through issues related to divorce, relationships, empty nest syndrome, grief and loss, trauma recovery and career concerns.

“They just know – they operate in the present moment at a different energetic vibration than we do,” said Terri Mongait, an equine facilitated success specialist, certified Canfield success coach and owner and founder of the ranch.

She and her husband have owned the quiet 6 acres of land neighbored by other small ranches in Douglas County since 2011. Dogs bark inside her house and a clique of chickens cluck merrily in their coop as she leads her clients to the barn where Sparks, the 2-year-old black cat, rolls in the hay. Mongait pulls up a couple of chairs and, as the horses look on, she discerns the reason for the visit.

Many times the client has come to work on issues she may not even be aware of.

“You might say my kids just push my buttons and I need to work on that,” Mongait said. “I’d put you in the round pen with at least one of the horses, if not two, because you have more than one kid. Partway through, though, what the horse is doing and what I’m getting from my intuition and through my training is that yes, the kids are pushing your buttons but the root of the issue is your husband. So I say ‘this is what I’m getting – would you like to explore that today?'”

Horse experience isn’t necessary and for those who are afraid to climb in a saddle, almost all of the sessions stay on the ground. The 90-minute therapy never looks alike; each session is tailored to the needs of the individual client.

For a married couple trying to decide if they should stay together Mongait might hand them a bucket and tools and tell them to groom the horse as a way to “groom the relationship,” she said. She then steps back, watches the horse-client interaction and offers interpretations of both the actions and reactions of animals and humans.

David Block came to the ranch to work on intimacy. A twice-married father of four, the 74-year-old has struggled throughout his life with people-pleasing and abandonment issues after his parents shipped him off to boarding school for most of his formative years.

After entering the pen with Ki, Mongait had him tell the horse what he was looking for and hoped to accomplish.

“I was sincere, coming from my heart, and 10 minutes into the dialogue he starts licking me,” Block said. “I had short-sleeve shirts on and he started licking me on both sides and it was like I get it. Horses are really smart – they know when you’re really genuine and when you’re not yourself. He related to not only the story but how I said the story. I realized that I’d never really tried to work on intimacy. It took a horse to get me motivated to do that.”

Equine therapy isn’t a new idea. The practice is growing in popularity around the world as people realize the ability of horses to tune into human emotion and become an active partner in the healing process.

Psychotherapist Melisa Pearce noticed the power of horses at her Arizona retreat center in the ’80s. In between Gestalt therapy sessions, her clients would wander to the pasture and interact with Pearce’s horses. When they returned to analysis, she noticed a change.

“There was a change in the person’s overall energy,” said Pearce, founder of the Touched by a Horse Certification Program in Elizabeth, “and their ability to explain emotions. Sometimes a release of emotions was happening.”

She began to invite clients to spend time with both her and the horses, often asking them to help her with grooming, and noticed they would naturally open up emotionally even more around the creatures.

“They’re big and demand attention in the moment,” she said. “They bring us to what’s important right now. They want us to be more joyful, more happy, more free, more liberated. While clients are talking about painful things, the horses are working all the time to attune the person’s energy field and help them rise up into a more joyful state and into the present moment. They’re masters at seeing where we mess ourselves up and demanding our attention to be in this moment and to find joy.”

Mongait can speak personally to the animals’ capacity for healing. In 2009, as she participated in Pearce’s program, she suffered a traumatic brain injury. Naturally she took part of her rehabilitation work into her stable.

“I would saddle Smarty for physical activity and what I realized was when I tried to saddle her she would become a moving target – she’d dance around and I had to work on eye-hand coordination and multitasking,” she said. “I’d have to cinch up and saddle a horse that’s moving and that really worked on what I needed work with. If you went up to saddle her, she’d stand still. That’s not what you needed. They sense what you need.”

A new stepmother struggling with her three stepkids came to Mongait’s ranch seeking help. Mongait brought two of the horses and Burrito into the pen (one horse for each child) and told her to get them all moving in the same direction. One horse refused to do anything, the other obeyed her and Burrito clung to her side.

“I said, what’s this dynamic?” Mongait said. “She said that’s my son, he pretty much does what I ask him to do. This is the youngest one who’s attached to my hip. The one not moving is my daughter, a tween. I said OK, get them all moving. She spent most of her time with the one that wasn’t moving. I said, is this what you do at home? She said yes. It was huge for her.”

Horse brains are different from human brains in that ours can do qualitative and quantitative reasoning, such as math, Pearce said. But that difference also means humans can do neurosis – and we do it well. While we worry about things we did yesterday and how it will affect all of our tomorrows, horses have moved on.

“We spend a lot of time out of the present moment,” said Pearce. “Horses spend all their time in the present moment. Out in the pasture they’re not thinking I hope I did really well yesterday with that client – they don’t go through that anxiety.”

Nancy Gardner booked a session at the ranch to have a firsthand experience of Mongait’s work. Before she entered the pen with Ki, the 57-year-old from Castle Rock prayed the Holy Spirit would be within the horse and speak with her. As she interacted with the fox trotter, he breathed on her twice in a way that left no doubt in her mind.

“It wasn’t like he was smelling you,” she said. “Terri said that’s the breath of God. Horses rarely do it. It’s very profound. It felt like the Lord was in this experience. I was asking a question and started walking and the horse said no, that’s the wrong way. He had me go a different way and halfway he just stopped me. I had to work on self-acceptance. It was so clear.”

Are you ready to get the tools you need to Live Out Loud? To Schedule a Session, or learn more about Begin Again Ranch, Call 720-467-4143 or email terri@beginagainranch.com to schedule the first step on your Healing Journey